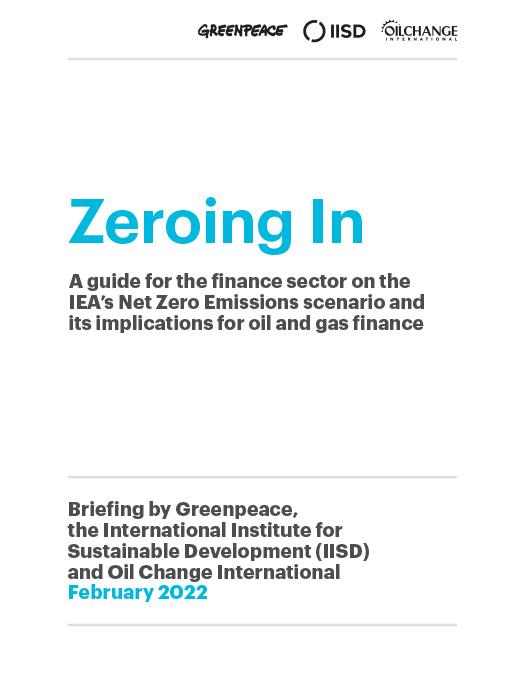 Zeroing In: A financial industry guide to the International Energy Agency’s Net Zero Emissions Scenario and its implications for oil and gas financing

In 2021, the International Energy Agency (IEA) released its first guide to what the global energy system would look like if global warming were limited to 1.5°C. The IEA’s Net Zero Emissions by 2050 (NZE) scenario grabbed headlines with the conclusion that oil and gas in fields already in production or under development will be sufficient to meet demand: there is no There is no need to develop new oil or gas fields after 2021 in a 1.5°C world.

The conclusion that there is no need to develop new oil and gas fields follows from the arithmetic of 1.5°C, not from the modeling choices of the IEA. Oil and gas fields typically produce for 15 or 20 years, and in some cases longer. Over their lifetime, production rates from fields decline as extraction reduces pressures on reservoirs, even with continued investment in these fields. For conventional fields, this decrease is on average about 4% per year. Historically, the oil and gas industry has continually developed new fields in order to maintain and increase total production. However, limiting warming to 1.5°C requires a reduction in oil and gas consumption of around 3 to 5% per year. This is why the IEA concludes that no new fields are needed: in a 1.5°C world, oil and gas consumption will decline at about the same rate as production from existing fields. This rate of decline is seen in other 1.5°C scenarios, including those published by the Intergovernmental Panel on Climate Change.

While the IEA makes the conclusion on new oil and gas development explicit, the same conclusion is implicit in all 1.5°C scenarios that do not have to offset emissions based on an implausible amount of future reliance on carbon dioxide removal through unproven technologies and/or massive conversion of land to forests and plantations.

The IEA’s NZE scenario is rather conservative about the pace of fossil fuel phase-out. While the NZE’s reliance on carbon dioxide removal is quite modest compared to other scenarios, it boldly uses carbon capture and storage (CCS) to capture emissions from burning fossil fuels. . The NZE would require 800 mid-size CCS plants to be operating globally by 2030, which would require the construction of two plants per week by 2030. After 30 years of trying to commercialize CCS, its costs have remained high per than expected, and only 27 commercial-scale factories exist worldwide. Avoiding the uncertainties associated with CCS would require a faster phase-out of fossil fuels, including the early closure of some existing oil and gas fields.

This briefing explains in simple terms what the IEA’s conclusion means and why the IEA reached its conclusion, with comparisons to scenarios published by the Intergovernmental Panel on Climate Change. The briefing provides advice to financial actors such as investors, banks and insurers on how to incorporate the IEA’s findings into their decision-making.