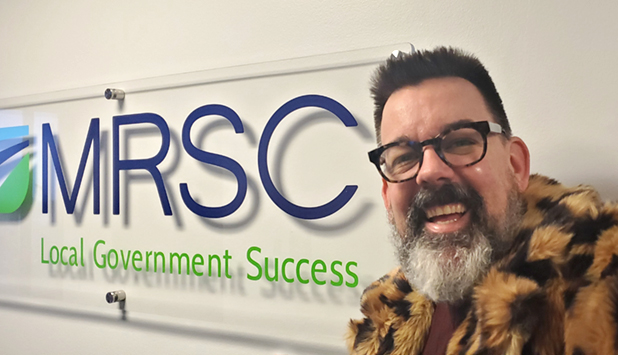 “A man always has two reasons for what he does; a good one, and a real one ”- JP Morgan

I will go ahead and give the real one. A career in public finance was not something I had planned, but it was the winding path I took. I have found working in public finance to be a rewarding and enjoyable career, and I hope my experience serves me well as I begin my work as a finance consultant for MRSC.

I grew up in Las Vegas, Nevada, which despite its image, was a pretty normal place to grow up. However, I have to say I was surprised when I went to college and learned the term ‘last call’ and you can’t buy 24/7 alcohol in d ‘other states.

After high school I attended Arizona State University where I graduated with a bachelor’s degree in high school education with a major in English. After I graduated I returned to Las Vegas where I taught college English for 5 years. I am happy to have the opportunity to use my teaching skills again while working at MRSC.

In 1999 I moved to Seattle to sing and play in an alternative rock band. After realizing that I needed a career that really pays the bills, I returned to school in 2004 at Central Washington University, where I graduated with a bachelor’s degree in accounting. I landed my first finance job in 2007 with the City of Lakewood in Accounts Payable and quickly moved on to Payroll. I was promoted to financial analyst and finally financial supervisor, where I gained experience in the field of fixed assets, budgeting and preparing the full annual financial report. I am grateful for the experience and knowledge I gained during my nine years at the Town of Lakewood.

In 2016, I became CFO of the Timberland Regional Library, a system that operates 27 community libraries, 2 cooperative libraries and 3 library kiosks in Grays Harbor, Lewis, Mason, Pacific and Thurston counties. Later, I also supervised the information technology (IT) department. While at the Timberland Regional Library, I was able to implement a more transparent budget process, improve internal processes, work on policies and oversee the conversion to a new accounting software system.

Throughout my career, I have found the MRSC to be an extremely valuable resource, and I am thrilled to now be part of a team that offers so much to local government in Washington State.

Eric Lowell joined MRSC in December 2020 as a financial consultant. He has been involved in local government finances for over 13 years, including working in municipal government as well as for a special purpose district.

Eric holds a BA in Secondary Education from Arizona State University and a BS in Accounting from Central Washington University.

SEE ALL MESSAGES BY Eric Lowell